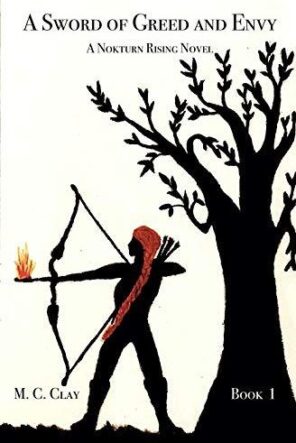 Lark Kravinoff knows what it takes to be a skilled huntress and a feared warrior. She has worked hard, training for the human uprising against the vicious creatures of the night called Nokturns. Nokturns could be Vampires, Werewolves, or Reapers, all of which give a human plenty of reason to be terrified. But, when a twist of fate forces Lark to fight for her own survival, she finds her life colliding with that of the Nokturns. Her life becomes entangled with a Nokturn who calls himself ‘Ash’ and she begins to see a different side of the monsters she has learned to hate. When Lark realizes she isn’t so ordinary after all, and not knowing who she can trust, she has no one to turn to but Ash. As tensions rise between the four factions and civil war seems inevitable, Lark must face difficult decisions that bring her own humanity into question. She must choose to rebel with the human faction, or turn her back on them, leaving their fate in the hands of their predators and possibly sending humans into extinction. Can Lark survive the fall of the blade that threatens the fragile hierarchy of Nokturns? Or will greed and envy consume her?

The world creation was great. I loved the whole idea behind different creatures living in their separate zones or ‘Kingdoms’ if you may. I could see that the author had really thought out how everything works in Maldara and there was a very good introduction to the world in the first chapter. However, later on, some things that I thought were rather important to the story were simply thrown in without much of an explanation. I’ve read a lot of YA and fantasy, so I understood, what M.C. Clay was conveying, but I would’ve loved it if there was more descriptions and explanations on certain parts of the book.

I liked the main character, Lark, right from the beginning. A strong, independent, capable girl. I had a slight comparison to Katniss Everdeen in the first chapters of the book. She lost some of her spark along the way and had a hard time making smart decisions. Part of the plot was driven by Lark not thinking things through before acting.

Ash I loved! He was this perfect dark and broody guy. Very protective. And deep down soft and sensitive. I think the conversations between Ash and ark were the best part of the story!

Overall, it was an enjoyable read that I think a lot of the younger readers would love to get their hands on.