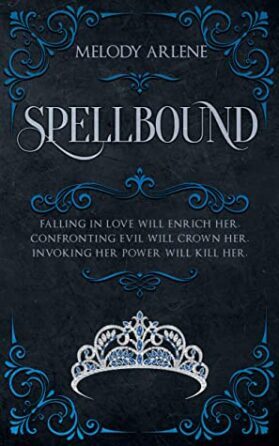 Sabrina Hawes of Galen City is a common woman, a renowned sorceress who had a heart for adventure and a celebrated mind of magic. After tragically losing her parents three years ago, she confronted their attacker, a clergyman, but the confrontation accidentally ended with his death by her hand. Sabrina had retreated to the shadows of the city forced into hiding by rumor and suffocating city gossip. Though a position as one of the king’s advisors helped her keep a daily routine, she never fully recaptured the citizens’ good favor. With her days predictable and planned, she spent her leisure time exploring the world away from the eyes of the city where she once flourished.

The king’s nephew, affable Baron Maxwell Aldaine, is a Galen City soldier, recently wed to noble darling Hazel Barnaby. He lives the polished, rehearsed, and unhappy life of a young royal with a generous, phony smile to his skeptical citizens. He also had been missing for three months and feared dead, after he and a team of soldiers ventured on a rescue mission to save their missing friend, a Galen City naval captain. The failed operation left the baron alone in a lightless dungeon, waiting for death.

Sabrina, while exploring a neighboring island, stumbles upon Galen City’s nephew, Baron Maxwell, and rescues him. Through a case of mistaken identity, she believes he is but a common man. His irritability helps create a contentious journey home and lays the framework for two individuals always at odds. But they would soon come to realize their lonely hearts were beating for one another in a world where class dictates desire.

This book is breath-takingly beautiful! I fell in love with the world, the characters,…; the way baron Maxwell expresses himself is poetry. Sabrina is an incredible character and I loved reading her story and about the difficult past that shaped her into the woman Max fell in love with. The whole of their story is amazing and it engulfed me whole.

I absolutely reccommend it, I can’t give it high enough praise with only my words, you’ll need to experience it yourself!