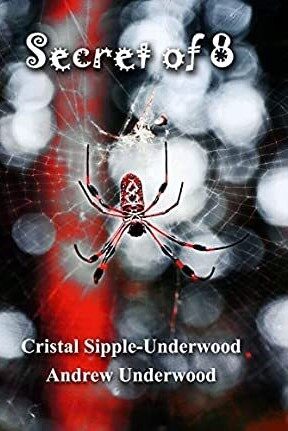 Imagine a world where being different was better than being ordinary.

Six misfit kids find themselves part of an unsolved mystery when Ben and his family move into a haunted house. Not only do they all find acceptance but unite together to become ghost hunters. By using their unique abilities and teamwork, they get one step closer to solving the case. They never imagined the magical transformation their lives would take.

Secret of 8 starts like any other children’s story would: with a new kid moving into the town, new friendships forming and an ancient mystery to solve. It concentrated on a group of kids. Thirteen year old Sarah, her younger sister Stephanie, almost fourteen year old Ben, his brother Mike and Nate. As Ben’s family moves into a haunted house the children take it upon themselves to discover the secrets of the past.

The story was captivating. I wasn’t bored once. I was however scared several times and creeped out several more. As a proper mystery book, it made the hairs at the back of my head rise up and I contemplated hiding under the bed a time or two or putting the book (together with all of my computer) into the freezer – like Chandler from the TV show Friends did when it got scary. It really got scary!! The closet doors were moving without being touched. Lights were blinking and turning off. Children got locked up in cold dark rooms. Did I say, things moved on their own?

When I first started reading the book I placed it into the middle grade genre, it’s a children story with kids going around town solving a mystery. It reads, at least to me, like a middle grade book. But the more I read – and the scarier it got – I started doubting the placement. It could better suit under the lower half of the young adult. I bet many kids would find the whole story exciting to read, but some just might have nightmares afterwards!

I loved the use of historical facts and little informational snippets. I especially enjoyed the scene where the children got to develop their own photographed pictures and how Ben fan-boyed about an old steam engine Consolidation 2-8-0. I feel like those hidden gems do great in sparking the young readers interest into the history and lifestyle in the 1980’s.

The characters were all very well portrayed. I especially enjoyed the fact that Nate was hearing impaired and included into the adventures like any other good friend would have. I loved seeing how it was the differences the kids had that made them into a perfect investigative team. This book is ideal in showing that friendships can be made anywhere and even the scariest kid in the neighbourhood can – in the end – show a different side to them and help you out in your darkest hour.

Secret of 8 starts like any other children’s story would, however, it ended in a series of events that one might describe as gory. The closer the children got to solving the mystery, the darker turn the story took. And even though it ended happily – to most people involved! – there were parts that could disturb some of the younger readers.

I absolutely enjoyed the whole story – being scared or not!! It is an amazingly well written story, full of adventure, friendship and I would recommend it to anyone brave enough to go ghost hunting with a group of friends.

I don’t think the book cover does the story justice (I am not a fan of the design and I am not sure any teenager would look twice at it), but for once I encourage you to not judge a book by its cover.