The Awakening (The Immortal Wizards, Book 1) by Andreas Suchanek 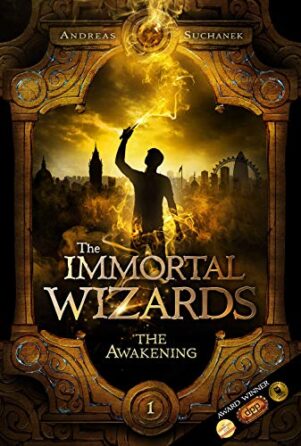 The world as you know it is a lie.

For over a century, the mystic Wall has kept the magical society hidden from human eyes, guaranteeing peace and equality between humans and wizards. But in the shadows a war for supremacy rages.

Jennifer Danvers is a wizard. When her friend and comrade-in-arms dies, a new heir to magic awakens in Alexander Kent, whom she must introduce to the world of magic.

Neither of them suspects that the balance of light and darkness is out of control. An ancient evil is rising. It’s only goal: to shatter the mystic Wall and bring darkness upon the wizards and immortals.

Finally there is a book with characters in their twenties that reads like a young adult novel! That is exactly what I have been looking for ever since I got out of my teens. I love young adult books, who doesn’t? But I don’t want to keep on reading about yet another 16 year old figuring out life. The Awakening is exactly what I needed it to be!

Are the characters childish? Perhaps a little, but do we ever really grow up? I loved the constant bickering between them and so should you! I’m the same age as them and I can relate. The fact that you are in your twenties and called a grown-up doesn’t mean you always ACT like one!

I was moved by their back stories, especially Jen and Alex, when they finally found out what makes the other tick. I enjoyed seeing their relationship grow into friendship.

The whole idea about a magical essence that picks a worthy heir to bear the magic is fascinating and I absolutely loved the creation of the world. It was detailed and I could imagine walking around the Castillo myself. Sitting in the tower with all of the friends, drinking coffee or taking a portal to New York!

This great fantasy book engulfs the reader into a new world of magic. The ever present fight between good and evil runs deep in the story line and fuels the plot.