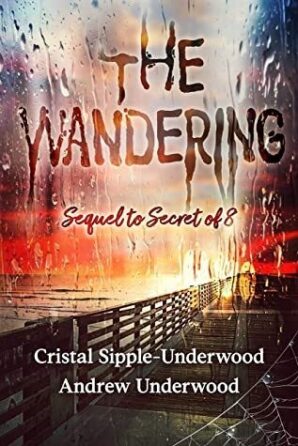 Imagine a world where being different is better than being ordinary.

In book two of the series, Sarah and Ben, along with their friends, embark on another paranormal adventure. Two weeks after solving a murder mystery in their home town, the kids are headed to summer camp. Little did their parents know, keeping them out of trouble would be way more difficult than anticipated. Once more, the ghost-hunting team of misfit kids are thrown into uncharted territory.

New alliances bring unexpected changes to their recently discovered powers and to the purpose of their group abilities, a purpose that surpasses all expectations and steers them toward a future they may not be ready for.

This will be a summer to remember and the beginning of a lifetime of self-discovery.

In ‘the Wandering’ the kids Sarah, Steph, Ben, Mike, Marcus and Nate go into the summer camp, where their new found ghostly abilities amplify after meeting the camp director’s deceased son. They make new friends, Tia and Tyrone, who are quickly brought into their Spider Gang; it was as if they were meant to meet! Tia and Tyrone are twins, who since birth have had special abilities of their own and fit into the adventure seeking grew flawlessly. Nate gets to have a girlfriend, May, who somehow cancels out everyone’s powers when she is around, which at times turns out to be a good thing. The group’s abilities are – at times – getting out of hand and May is, at least at first, not kept close for her shining personality, but the nullifying effect she can have on Sarah’s ghost seeing and Mike’s ghost hearing gifts.

At times, it felt like I was reading two different books: one where the kids were trying to figure out the new mystery they had gotten involved with and second one where they were simply part of a summer camp with it’s fun all-consuming activities. There were times those two merged together, like when they met the American Indian’s, who were brought in by the camp to organize fun activities and somehow seemed to know all about what was happening with the Spider Gang.

I was infuriated by the way the camp director, Sarge treated the kids right from the beginning of the story. There was a reason for his ‘sparkling’ personality, which you’ll come to know as you read on, but it didn’t make me any less frustrated by his actions. Incredibly so. I am totally taken aback how well the writings of Cristal and Andrew awaken several conflicting emotions within me as I read their books. The characters are so well portrayed and well written, it is as if they are real and standing right in front of me. Besides Sarge, May was making me mad more than once too!!

I loved getting to know the characters, had fun as they fooled around and had the adventure of a lifetime.

This is not simply another ghost hunting story. This is about friendship, love and doing what is right, even if you have to get in trouble to do so!