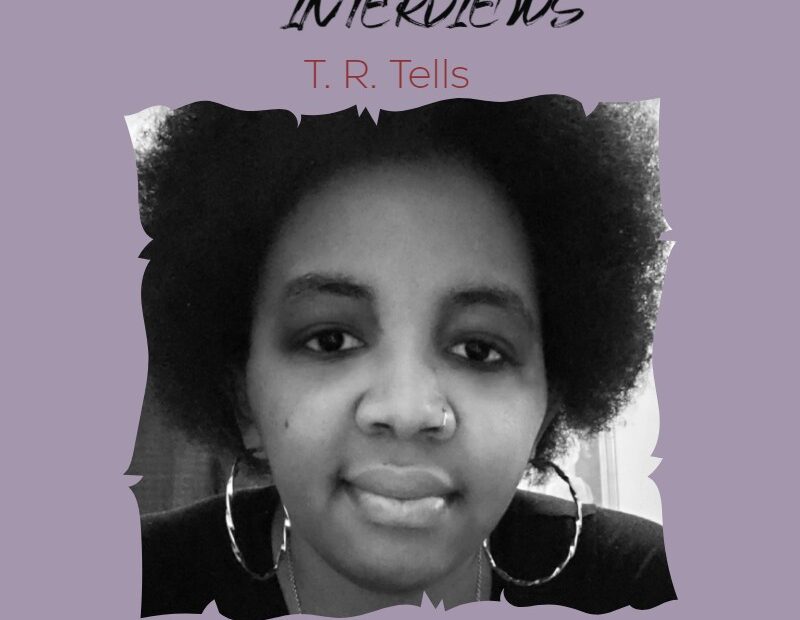 T.R. Tells chose the the pen name created as a play on words “T.R “TELLS a story”. She lives in upstate New York with her Bachelors from Southern New Hampshire University in Fiction and Creative writing. When she isn’t writing novels, ideas, short stories, or finished with her classes; she’s usually scrolling through one of her streaming services (Netflix, Hulu, Funimation etc). She’s a fan of Anime, RPG, and JRPG games; anything historical or fantasy (books or T.V. shows) – she can go on for hours talking about it or really anything that she is passionate about.
T.R. Tells feels a passion towards it and hopes that (even if it’s just one person) feels the amount of effort, love, and determination that is expressed in her writing.

I’ve loved reading and writing as a kid. My mom had me and my siblings reading. I ended up gravitating to the pen. Starting when I was 12, I wrote my first unpublished book at 14 called “adventure of the teens” (which still makes me laugh today). Which is kind of like my very first fan-fic/ self insert novel! After that, I wrote as an escape and the things I liked in movies/books I transported myself into those worlds.

Besides food and water?

I have to say a notebook, a fictional book, and a survival book.

Would you rather cook or order in?

[love me my Five Guys

When a phenomenon in the form of a bright light illuminates the city of Chicago in the summer of 2019 it causes major blackouts, accidents, and many to be hospitalized.

Seventeen-year-old Hira Night witnessed a traumatic event when a routine cop stopped her and her boyfriend that night; the results devastating and heart-breaking. She is given a choice to fight for justice and right the wrongs of society, or do nothing and let the destruction of humanity continue.

Her world is thrown into chaos as she is confronted by creatures spawned from absolved negativity—Umbra Shades—that linger among the traumatized and abused.
To save the victims from their gruesome fate, Hira slays the creatures from preying on the innocent, all the while trying to live a normal life.

But something else lurks in the shadows, something much more dark and sinister than she’s ever encountered before.

With Alina Mulgrave defeated and in custody, Hira Night and Helene Roe have found themselves enlisted in the ranks of an organization that specializes in finding Awakeners and reintegrating them back into society.

Allied with other Awakeners like them, Hira and Helene train and get stronger with their newfound powers, but the growing threat that lurked in the shadows comes to light.
The cult the Dark Ordinance will stop at nothing to awaken a powerful deity that can end all life as they know it.

It’s a race against time as the growing threat of the ritual makes its debut, but can Hira stop the rise of the godly being with her new form alone, or will her morality crumble in the face of adversity?

What is your latest release? Tell us a little about it and what inspired you to write it.

My latest release was the 2nd book of the Paragons of Justice Series: Her Dark Virtue. I was inspired to write the POJ series because my strong sense of morals and need for change, Justice in the world. Argo, my MC tries her best, despite the negative effects of bullying, racism, and homophobia in the world she wishes to fight against the anomalies of darkness so people can live in just and true world that loves one another for who they are.

Do you have a favourite book among the ones you have written. Why that one?

My favorite ones of 4 I’ve written would be the 2nd book of my epic fantasy Trilogy “Twilight of the Gods”. The trilogy was one of my first books written as an Indie Author and I enjoyed the freedom of the world, the POVs of characters and gods I created in the story.

Oh, every character [including the villains/antagonist] have a small part of me and my thoughts, ideals in them (of course nothing extreme!) I’d probably have the most in common with Hira and Helene in the POJ series as we like anime and manga, so I can see us discussing different animes, and going to conventions together.

What is one of the most interesting things you have researched while writing a book?
What were your expectations for writing and publishing your first book? Have they changed since then?

Oh my gosh, I’ve researched so much, written so many notes down and saved tabs on my computers. I remembered for my Epic Fantasy trilogy I had to look up different kinds of poisons and how certain ones could effect the body.

My most favorite is looking up the background of a certain place, I like knowing about the world I’m basing my book off of.

How long have you considered yourself a writer? Did you have any formal training, or is it something you learned as you went?
What are you currently working on?

I know they say if you write anything you are a writer. I guess it took my first book to really set in “Yes, dog gone it you are a writer” I didn’t have any formal training, though I do have a Bachelors in fiction and creative writing. I’ve learned as I went, learning from others, and my mistakes. I’m currently working on the 3rd book of the POJ series and a Middle Grade retelling of the Divine Comedy’s Dante’s Inferno.

Depends on if I’m a main character in a story. The cloaked man will kidnap me and bring me to a magical world where I am probably destined to fight a magical war and the woman is either used to lead me to her group which are fighting back against a totalitarian maniac….yes, I have a very overactive imagination

I’d still rather ask the drunk woman, logically she’ll be near a bar, and if her instructions aren’t coherent I can ask someone in there.