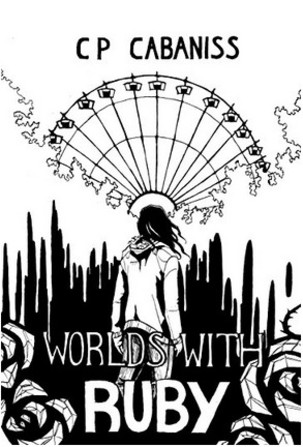 When you’re already dead, why should you be afraid?

When Ruby finds herself on the edge of a cliff in a land between life and death, with an ominous creaking coming from the nearby woods, she is left with no choice but to follow it to its source. Nothing is what it seems and Ruby soon finds herself being whisked away to worlds beyond her imagination. Worlds in need of saving. Along the way, she discovers that in saving these worlds, she is saving herself.

Worlds With Ruby is a short book about a magical Ferris Wheel that takes you to your destiny after you’ve passed away. Ruby gets stuck in a circle of respawning at the Ferris Wheel, because she has unfinished business before she can really move on.

Ruby is shown as a strong and opinionated character, but that is only a part of who she is. There’s a side of her she tried to suppress in death that she needs to learn how to embrace instead. Her journey through fantastical lands will bring her closer to finding herself.

It is a humorous and beautiful story about adventures to otherworlds and facing your fears. I quite enjoyed the storyline and was only a little taken back by the numerous italic words that in my opinion didn’t really need to be highlighted in such a way.