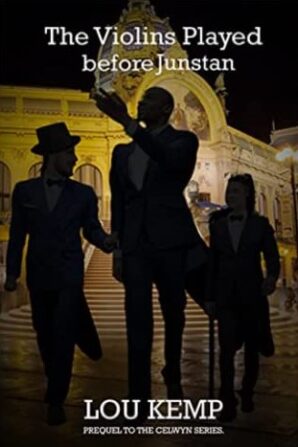 At first, the immortal peyote-eating magician Celwyn is hired to deliver an automat, Professor Kang, to a priest called Talos. Everything Talos told Celwyn was a lie, and by the time their ship, the Zelda, encounters a terrific storm in the Arctic Circle, Celwyn finds he must reconsider his allegiance. He chooses Kang, and they travel to Singapore, preparing to journey west. In order to deflect the attention of the city’s police, they allow an American heiress to go with them as she escapes matrimony to seek adventure. Her crazy aunt hops another train, and the pursuit is on. The third member of their friendship is from Juba in the Sudan; a widower, scholar, and brave but superstitious man. Their deep friendship grows as they battle several malevolent forces at the same time, and rescue two orphans along the way. Celwyn has avoided caring about anyone for hundreds of years, and now must learn the cost of friendship, and loss. Eventually they reach Prague. The culmination of their battles with evil occurs on the Vltava River under the shadow of the Prague Opera House. As always, it is accompanied by the ethereal music of the magician.

If you love fast paced action packed books, you’d better look around for something else, because this book is not it. If you, however, enjoy knowing the characters through and through, like the slow burn of a deep travel story of the most peculiar company hunted by many dangers, Violins Played Before Junstan is exactly what you’ve been looking for.

You can find action, magic infused in music, but certainly the real kind of magic!, unbreakable bond of friendship and a slight touch of romantic affections in this book. Vampires roam the street along with other sorts of entities that do not wish you all the best when you pass them by. We are used to vampires, right? But these ones are the real, dangerous and very much the unsexy type of bloodsuckers. Something to keep away from for sure.

Throughout the duration of the book a magician Jonas Celwin and his friends do their best to keep clear of all of the dangers. Celwin is an incredible character, unlike any you’ve encountered in books. He might be heroic, like all the rest of them, but his character is substantially striking. Righteous in his own way he craves to bring justice to anyone deserving and hellish coincidences to whomever stands in his way. Not everyone’s crimes are all that bad, but Celwin can’t stop himself from even policing the way some people view the world and think. His interactions are highly amusing and great to follow.

I didn’t know where this plot was headed, the beginning of the book was rather slow, but the ending just left me speechless. I find it a cruel, cruel ending for the adventurous magical journey the author had taken me along on. And for you to know what devastated me so you’ll have to take that journey for yourself!