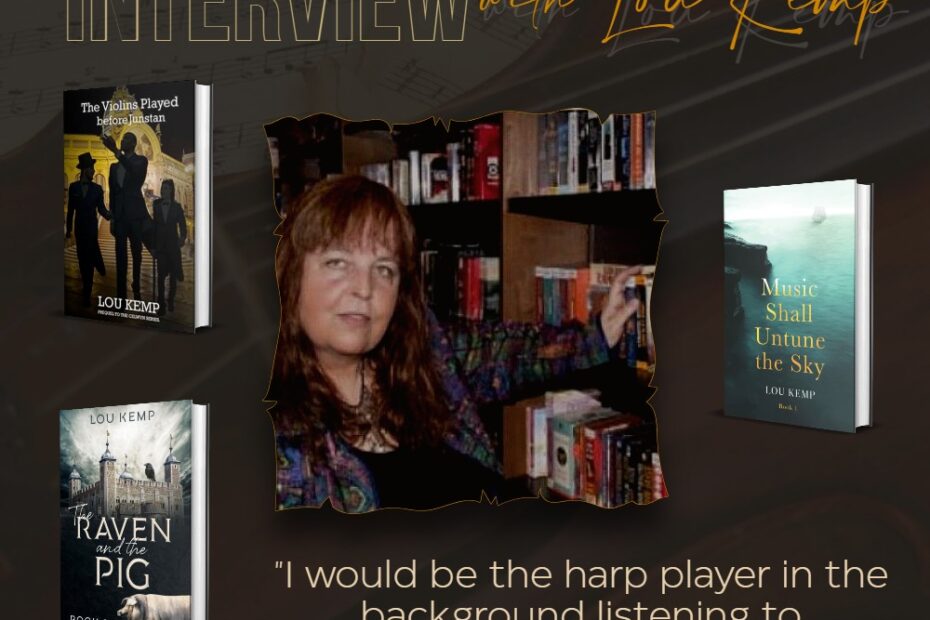 Lou Kemp’s early work was horror and suspense, later work morphed into a combination of magical realism, mystery and adventure painted with a horrific element as needed.

She is one of those writers who doesn’t plan ahead, no outlines, no clue, and I sometimes writes herself into a corner. Atmospheric music in the background helps. Black by Pearl Jam is one that really helps.

What is the best gift you have been given?

As a writer, the gift of constructive feedback.

The right of a woman to be her own person.

Please ask yourself ‘what if?’ and read the Celwyn series with that in mind.

About The Violins Played Before Junstan

At first, the immortal peyote-eating magician Celwyn is hired to deliver an automat, Professor Kang, to a priest called Talos. Everything Talos told Celwyn was a lie, and by the time their ship, the Zelda, encounters a terrific storm in the Arctic Circle, Celwyn finds he must reconsider his allegiance. He chooses Kang, and they travel to Singapore, preparing to journey west. In order to deflect the attention of the city’s police, they allow an American heiress to go with them as she escapes matrimony to seek adventure. Her crazy aunt hops another train, and the pursuit is on. The third member of their friendship is from Juba in the Sudan; a widower, scholar, and brave but superstitious man. Their deep friendship grows as they battle several malevolent forces at the same time, and rescue two orphans along the way. Celwyn has avoided caring about anyone for hundreds of years, and now must learn the cost of friendship, and loss. Eventually they reach Prague. The culmination of their battles with evil occurs on the Vltava River under the shadow of the Prague Opera House. As always, it is accompanied by the ethereal music of the magician.

If you love fast paced action packed books, you’d better look around for something else, because this book is not it. If you, however, enjoy knowing the characters through and through, like the slow burn of a deep travel story of the most peculiar company hunted by many dangers, Violins Played Before Junstan is exactly what you’ve been looking for.

Tell us a little about the book. How did you come up with the idea for Celwyn series?

In 2011, I sent in a short story to the Mystery Writers of America featuring Celwyn that appeared in their anthology that year (Crimes by Moonlight), edited by Charlaine Harris.  The story of Celwyn needed to be told both before that short glimpse, and afterwards.

What kind of role does music play in your life? Where did Celwyn get his musical way of doing magic from?

I’m a trained musician, and have studied various factors concerning music numerically, and as it concerns color.  Celwyn depends upon the music to direct his magic.

Do you have a favourite scene from the book? Something you enjoyed writing the most or think came together well?

The beginning, where Celwyn gets to know Kang and enjoys an explosive electrical scene at sea.

If you were a character in Celwyn series, who would you be and why?

I think I am part Celwyn and part Kang.  Celwyn for his playfulness and temper, and Kang for his logic.

I did a short bit of research for Farm Hall (the companion book to the Celwyn series) and look up a fact here and there as the series goes along—usually geographical.

That is had begun, and would be a great ride.

I hate marketing.  I love meeting other authors and readers.

Book 5 of the series.

I would be the harp player in the background listening to everything and knowing of danger.