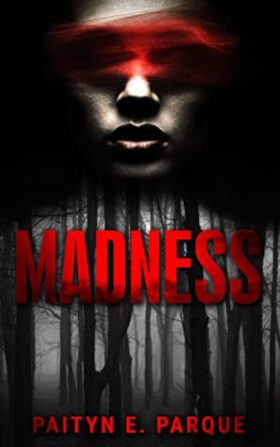 Death is not an escape.

One night Ezra Adkins is brutally murdered in her own home. As she was dying, she expects to wake up in the afterworld.

She loses consciousness and awakens into a horrific game of kill or be killed. Players can be killed an infinite number of times, but the only permanent way out of the game is their actual death by suicide.

Players in the game ruthlessly hunt each other for points, while others kill for fun. Most players have given up on finding an escape from the game and spiral into insanity, killing without reason.

Ezra soon learns who to trust and who to hunt down. But as she falls deeper into the game, she starts to lose herself as the bodies pile up. The line blurs between what she’s always known to be right and wrong.

Metal will clash. Blood will spill. Minds will break. And before it’s too late, Ezra must find an escape from the game before she becomes the real enemy.

I was at the point where reading one book took me ages and I was certain it would take me at least a month, but I finished Madness within the week of starting! It was just that good!

I plunged into the book with an open mind, not really knowing what to expect. I’ll tell you: you can expect incredible character growth, great plotline and amazing writing. Paityn Parque has created an unbelievably realistic world within a mindblowing computer game. It’s something that many authors aspire to do, and only some succeed. You do not notice from the vocabulary nor the writing style that this young author is only fifteen years old. This novel is a masterpiece in its own right.

Right off the bat, Erza gets thrown into a game that keeps her trapped, until she either succumbs to the madness of it or wins enough points to buy her way out. There is no escape unless she does either of those two things, but neither of them is easy. This book has brought to life its own version of squid games. Kill or be killed. Win by being the best in it. Most players go crazy before gaining enough points to get out.

Erza is my favourite kind of protagonist: strong-willed, stubborn, kind and totally bad-ass. I related to her the moment she was introduced and we don’t even have all that much in common, except I can be kind, too. Her journey takes her from innocent-scared girl to a leader of sorts to a gang of players. With the most feared skill set she manages to raise up the ranks faster than any other player. It is a bloody, messy, crazy raise that in its madness will leave you on the edge of the seat and somehow still craving for more.

Jack is Erza’s teammate and I absolutely enjoyed their love and hate relationship, the secrets and tension. Can’t say enough of how much I really, really enjoyed it. And you’ll simply have to read the book to enjoy it, too! You should definitely read the book!!

I can’t recommend this book enough. If you are into a bit darker, paranormal inspired actions books Madness is something you’ll really have to read.