Darkness Within by Cyprus Hart 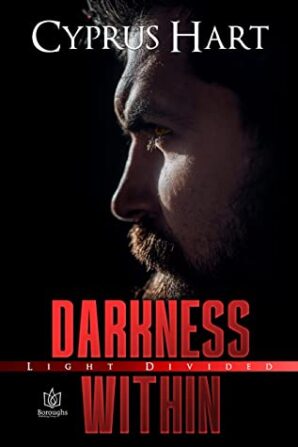 Aideen Duffy’s job is hunting down the dark creatures who are trying to overthrow human society and bring the world back to how it used to be when vampires, werewolves, and their ilk were in charge.

The culmination of two years’ work, she’s closing in on Costecu, the vampire responsible for the most deadly cell in her city. When the op goes sideways, instead capturing the elusive bastard, she ends up with second prize: his right-hand man, Druain Lindberg.

What happens next, she couldn’t have planned for in a thousand years.

Deep undercover, Drew is swimming in the blood of Costecu’s treachery, but he’d do anything and everything to destroy the heinous vampire who’d ruined his life.

With the stink of evil ground into his pores, he’s ordered to kidnap Aideen and bring her to Costecu, but this time following orders is not going to happen. The spirited selkie can’t be cowed, and something in her calls to him.

When Drew risks long-held plans to save Aideen, everyone – good and evil – are after them. Keeping them hidden long enough to escape is not as big a problem as her letting him do what his heart compels him is essential – protecting her with his life.

Zero and Lindberg. Aideen and Drew. Wow, where do I begin? This book was gripping from the second chapter to the very end. Second, you ask? As I started, my partner was watching Brooklyn 99 very loudly and I’ve found out it’s one of the most distracting shows you can attempt to read to, which is one of the reasons the first chapter went a little slow for me. That, and the fact that part of the world building was delivered in a rather telling way as Aideen’s character got introduced — the only complaint I ever had throughout the whole book!

Drew Lindberg managed to make me not care about whatever my partner was busy watching, because damn he is more captivating than any other character I’ve ever met. I was shortly taken aback by the fact that he’s a dwarf, because World of Warcraft, along with Lord of the Rings has painted a very one of a kind picture of what a dwarf should look like. Only shortly, because Drew is nothing like that! As intriguing as his character is, his descriptions paint him to be the biggest dwarf in fantasy history and a damn sexy one at that.

Yupp, Drew the dwarf, with his compelling attitude and the position he was put into right from the get-go was damn attractive. Part of the reason that made him such a great perspective to read was a struggle between who he had to be and who he wanted to be that felt so incredibly realistic and super well played out. I thought Cyprus Hart was telling a real story and vampires are real, impulsive selkies get captured and dwarves are hella big, strong and do not need an axe to cut through flesh and bones. The world became alive at his command and fascinating scenes got acted out by two outstanding characters.

Naturally, Drew was my favourite, but Aideen has a pull to her that any reader would enjoy. Her absurdly stubborn personality, courageous act and unwillingness to give up even at the most hopeless situations is, after all, what made Drew attracted to her in the first place. He called her Zero, because everyone else is using her real name and he is not everyone else. Now, had I been in Aideen’s position, I do not know if I’d been taken away by Drew’s muscular build the way she did. Because being in Aideen’s position would have sucked quite a bit for quite some time! And, without actually knowing Drew Lindberg’s thought process — which is the part that engaged me in — she had only his actions to rely on. His actions painted the man to be pretty violent and murderous. A trait that can only be attractive in books, if well written. Oh boy, was it well written.

So Aideen and Drew, a selkie and a dwarf, played cat and mouse throughout the book in the best possible way and I was glued to the pages, unwilling to stop reading, because I had to know how it all resolved. Everything about this story, from plot to characters to worldbuilding and writing down to the line is exceptional. Out of all of the enemies to lovers’ books, this storyline just totally crushed everything else I’ve ever gotten my hands on.

Do you love paranormal romance? This book is for you.

Do you love enemies to lovers trope? Man, this has the sweetest version of that.

Do you love unique voices and fleshed out characters? Yes, yes, yes!

Do you love trouble and intrigue? You’ll find it here!

Without further ado, Darkness Within is something every reasonable person has to get their hands on, because it’ll blow your mind in the best possible way.