Home » Blog » To Kill a Kingdom

To Kill a Kingdom 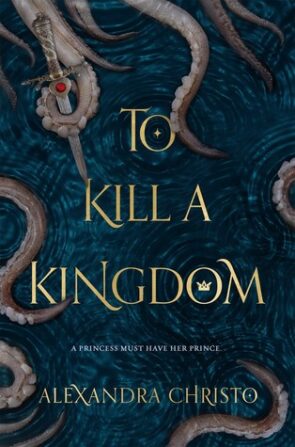 Princess Lira is siren royalty and the most lethal of them all. With the hearts of seventeen princes in her collection, she is revered across the sea. Until a twist of fate forces her to kill one of her own. To punish her daughter, the Sea Queen transforms Lira into the one thing they loathe most—a human. Robbed of her song, Lira has until the winter solstice to deliver Prince Elian’s heart to the Sea Queen or remain a human forever.

The ocean is the only place Prince Elian calls home, even though he is heir to the most powerful kingdom in the world. Hunting sirens is more than an unsavory hobby—it’s his calling. When he rescues a drowning woman in the ocean, she’s more than what she appears. She promises to help him find the key to destroying all of sirenkind for good—But can he trust her? And just how many deals will Elian have to barter to eliminate mankind’s greatest enemy?

I started To Kill a Kingdom, because we decided to read it together with a writers group I’m a part of. I’m not sure if I’d have finished it if not for the enthusiasm of the group. I’m not saying it wasn’t well writen, because it was. I’m not even saying the plot wasn’t good, because it was. The characters had their own unique quality to them, especially Lira, but I just didn’t feel that pull. I didn’t feel that excitement and rush that reading a wonderful book brings with it. I don’t think I connected with Elian and Lira, I certainly didn’t get attached to them and I wasn’t on the edge of my seat to find out what would happen next.

It probably says more about me and my expectations about books than about To Kill a Kingdom, because in all its glory, it is a good book. It just left me widely underwhelmed and unimpressed.