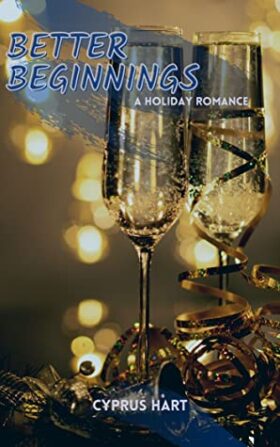 Leighton Welch is determined to cleanse her system of all the toxicity in Los Angeles, including her very recent boyfriend. She packs up what she can and moves as far away as possible, to a small town in Maine by the name of Bleaker’s Point. A brief encounter with a rude cabin-dweller starts her off on the wrong foot.
Ulysses Sherman lives all by himself in a self-made cabin outside of town, doing odd jobs for the residents and keeping to himself. When Leigh shows up asking for directions, he gets her on her way and out of his life. Or so he thinks.
Leigh, not liking how Ulysses seems to disapprove of her, is tenacious in her pursuit of answers. When she discovers the secret of why he’s living in the middle of nowhere, alone and crabby, will it be too much for even her to overcome?

I really, really, really like Ulysses. How do you pronounce it? I don’t care. I just absolutely love him! He’s taken. I’m taken. He’s fictional. Boohoo! I still like him, though! Like aaaaah! I am allowed to like more than one person!
I know we all choose the dark and mysterious guy over the sweet and kind. We love cocky men in literature, because they might just change for us… I mean for the main character who falls for them. Ulysses is neither dark nor cocky, although he does hide his past and keeps a lot inside. He is quiet, calculative, and caring. He keeps to himself, doesn’t bother anyone, lives a simple life, doesn’t ask for more than he needs and is polite. Leighton would say he’s brooding and grumpy, but Leighton also brings out the brooding and grumpy qualities in him better than anyone else could. Either way, Ulysses is super damn sexy just the way he is and you all need to get some of that.

Complete opposite, Leigh is loud, extraverted, materialistic – or so Ulysses would call her out on – hella pushy and lives to get noticed. There are parts of her character that make me pissed off at her, but she is absolutely amusing to read either way. Leigh is meant to push your buttons. There are so many things Leigh does that I would never in my wildest dreams consider doing, but in a way, at times I still managed to see parts of myself in her. It surprised me more than you could imagine and made reading the book even more enchanting.

Now that I’ve covered the two main characters all I have to say about the plot is that those two simply carry the whole thing in absolute symphony. They run the show. They ARE the show. If there ever was a character driven plot line, this is it, guys! And, oh boy, does it ride.

THE BOOK IS AMAZING, GO BUY IT. NOW!