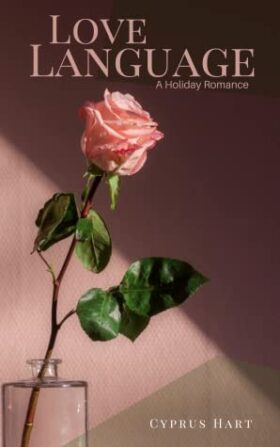 Esther Choi feels emotions and then paints them. When she wakes up on Valentine’s Day to discover her boyfriend has forgotten all about it, and then tries to convince her it’s not a big deal, she feels a whole lot of emotions. Escaping to her favorite coffee shop to express her disappointment and anger in a safe way, she steps on the foot of someone who then shows more interest in her artwork than anyone has in a long time.
It turns out Harrison Amiri runs a small art gallery. He’s very interested in Esther’s work, and also her. When his attempt to get her to come out from behind her emotional barriers backfires spectacularly, Esther flees to her boyfriend’s apartment. What awaits her there is an even bigger shock that sends her right back toward Harrison.
Can she overcome the fear of being herself long enough to learn her own love language, or will all she get out of Valentine’s Day be an empty heart and aching feet?

Oh my god. This was not what I expected it to be, as I’ve now read quite a few books by Cyprus Hart and they are almost all delightfully amusing. Even though Love Language had several amusing elements to it, it was an artfully emotional read for me. I feel like I connected with Esther and her insecurities in a way that none of Cyprus’ other characters have yet to touch me. And hell if his other characters aren’t just as mind blowingly amazing. The vulnerability Esther displays really spoke to my own soul and past experiences and everything she had to go through to reach her happiness just hit me on a whole new level.

This book is such a beautiful display of unconstrained love. Absolutely breathtaking piece of art and it left me an emotional mess with the way that it touched my heart. I felt like my own plithered teenage years were splattered across the pages of this book in the way I experienced the world through Esther’s eyes. Although I didn’t cry half as much as she does, I’ve felt absolutely everything she did throughout the whole book, which is absolutely insane. How can anyone write what I was unable to express years ago in such a vivid way? How in the hell has Cyprus managed to capture the soul of what so many women and girls are sure to go through at one point or another in their lives? I can’t express in words how much this book spoke to me.

God help me, I found Harrison absolutely adorable. A ray of light, exactly what Esther needed. So understanding. So damn patient. So humbly polite and gentle. There should be more Harrison’s in the world, because Harrison’s are hella hot in the way they take time to dwell on Esther’s emotional turmoil and dissolve our emotional messes into splinters at our feet.

I absolutely adore this couple. Adore, adore, adore! I just want to shout out how much I love them together and I don’t even mind this incredibly good man being taken, because he is taken by Esther who will love the hell out of him and they both deserve happiness together. THEY DESERVE IT!

One more thing I loved is how at the end of the book we came full circle to the way the whole thing started and I literally cried at the ending. Did I say I am not as emotionally unstable as Esther is? I really am not, but I freaking cried at the end, okay?

So be warned: This book is an emotional rollercoaster to all of us that are a bit like Esther or all the way full on Esther, but it is so worth it!