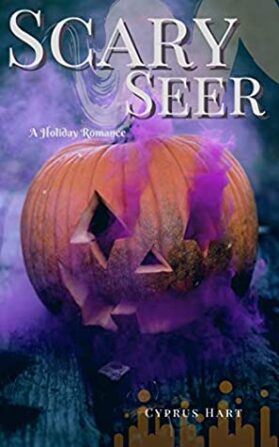 With Halloween less than a week away, it’s Anastasia Stuart’s last chance to drum up some business for her palm reading and new age store. Instead, she spends her time drawing and wishing for someone to show her the darker side of attraction. Desires she’s never told anyone else.
When Watson Adler comes into her shop and purchases a love tea despite professing his doubt over it’s efficacy, she’s left flustered and a little irritated. However, she can’t stop thinking of him, and a handful of encounters with him over the next few days leaves her wondering if something spookier than random chance is pushing him into her path.
Will he be the answer to her deepest desires, or someone scarier than she can ever imagine?

Soooo… Hmm… Yeah, that just happened. I must say I’m not surprised I managed to see myself in Anastasia, because somehow, even as they are all essentially different, all of Cyprus Hart heroines resemble me in some weird way. I’m in no way as crazy as Ana – because yes, we have another crazy female right here. Totally bonkers! Still, some of her personality quirks hit home in a maddening way. The other ones made me feel embarrassed and awkward as I read through them. I’ll never admit it again, but perhaps they felt too close to my own quirks as well. Either way I might or might’ve not been reading this book blushing.

Okaay, Ana… She has a wild thought process. She gets lost in her head, which is what I do a lot too. Her imagination creates crazy scenarios, which I tend to do, too, in what seems to be a less crazy way. At least to me. Anastasia gets incredibly overboard with her imagination and that’s a part of her character I enjoyed immensely. Where she starts to get over my personal comfort zone are her kinks and how far she goes with those thoughts. I feel like I’ve kind of walked in her shoes, but was even more boarded up than her, not able to express my crazy the way she does through her drawings and perhaps her semi-openness to her own madness is what made me somewhat uncomfortable at times. I’m also pretty certain I felt embarrassed by some of the scenes, because she herself felt embarrassed acting through them.

Goosh that widgety conversation with Watson after the haunted house was sooo me it literally just screamed at me ‘look, this is exactly how you acted several years ago.’ Wanting something, someone, but too afraid to act on it. Yupp, that’s something me and Anastasia definitely have in common. The whole thought process she went through was so familiar that it literally took me back to some of my own awkward instances. Absolutely incredible. I might want to say that was one of my favorite scenes, but then Watson showed up at her house! And things got even better! If not million times more awkward and slightly embarrassing. I have no damn clue why I took it on me to feel embarrassed for her, but hell, I did.

Now, Watson took me slightly by surprise, because at first we see this totally nice, slightly mysterious guy, but in the end… oh boy. He’s definitely got more to him than his calm poker-faced exterior lets on. The amusement in his eyes and the way it was described in itself was hot, hot, hot. There is something about being in control of your reactions and not letting yourself be read like a book that just totally makes a man sound damn attractive. Where Anastasia wore absolutely everything she felt splattered across her face and body language, Watson remained cool and contemplative almost throughout the whole book. This steady presence he radiated is something I would also totally fall for. And the playfulness? Super cool! Aaand everything else? Oh damn.

Now I thought the scene in her drawing room might remain my favourite, because it was absolutely sweet and kind of sexy at the same time. But daaamn, there were things at the very end that totally took me off guard. It wasn’t only the amusement in Watson’s eyes that was hot, hot, hot right then and there. Yupp. Yeah. Totally. Crazy damn hot, and noup, no more comments on that one. Am I embarrassed again? Yeah, maybe. But I’ll still admit I enjoyed it way more than I probably should have.

Scary Seer is definitely something that took me slightly out of my comfort zone, but it was a very enjoyable and amusing read. And pretty damn hot.