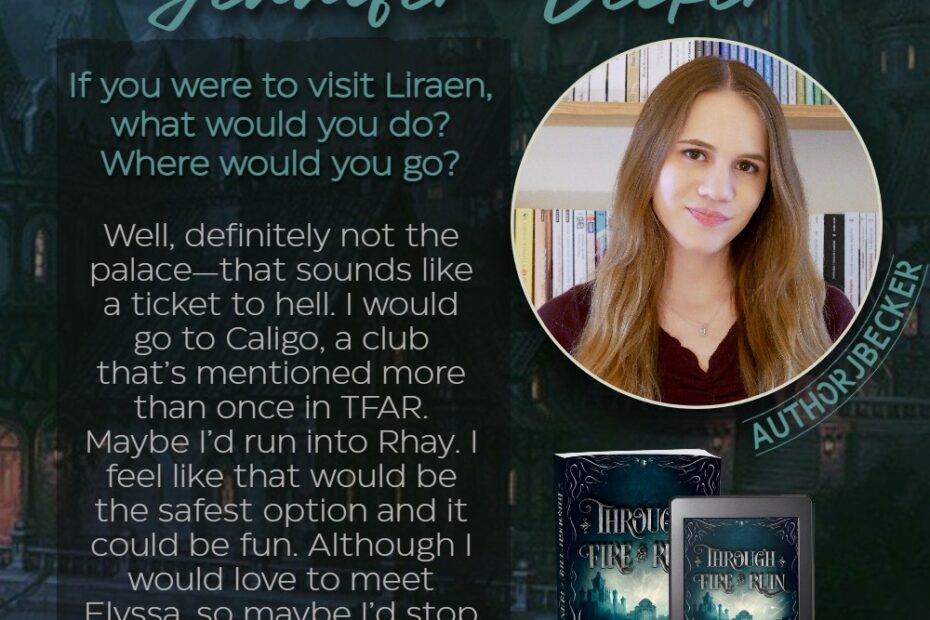 Tell us your story? What made you start writing?*

I’ve pretty much always been an avid reader but I didn’t start writing regularly until a few years ago, actually. When I was in school, I would write a bit for myself every now and then, but nothing was ever finished. I had this thought in my head that writing a book would be crazy and I could never pull it off. Then during my studies (I was a film student), I got into writing scripts which was the first time I saw myself as a writer.

Then Corona happened and like everyone else, life changed. I was living in the UK when it started as I had just finished my master’s degree there. When the first lockdown was announced I flew home very last minute, thinking I’d be back. The lockdown was a very weird time. Suddenly, I was home again, all my closest friends were either still in the UK or scattered around the world and no one could travel to anyone, and I was looking for a job in a time when people weren’t really hiring. One day, I was talking to one of my best friends, Alice, and we kind of jokingly decided to come up with an idea for a book and write something for fun. The idea of publishing wasn’t even on the table at first. It was all just for fun and maybe that’s why I wasn’t afraid to try. It quickly became much more than a fun story that would never see the light of day. And now I can’t imagine not writing. Now I’m really in it.

Christmas tree decorating. Christmas Day itself can be stressful sometimes but the decorating the night before is always fun even when things go wrong. In Austria, people usually decorate their trees on the 23rd and so do we. Except my mum and I always start quite late and end up working on it until 2am. The many breaks we take, including the cocktail break, might also be at fault for that.

Actually, I would rather have a peek into the future. I know that’s not the question but I’m going with it anyway. I can read about the past but no one knows for sure what will happen in the future.

What is one thing you will never do again?

My laptop, Wi-Fi if I can, and maybe a water purifier so at least one thing is useful.

If you could hire someone to help you, would it be with cleaning, cooking, or yard work? Anything else?

I’m not good at cooking and I always make the same simple things, so I would gladly hire a cook if I had the option.

About Through Fire & Ruin

This book stole my soul, ripped out my heart and crushed it between the very pages. Wow.

I got sucked through the portal right along with her as she entered the fairyland and fell into the arms of Eyden.

For centuries, humans have been at the mercy of the fae. With the border between Earth and Liraen spelled shut, humans have no desire to entangle themselves with the fae world again. But what if they are humanity’s only hope?

LORA has been warned of the fae her entire life. Yet when a deadly virus sweeps Earth, Lora risks everything to find a cure. Spinning the perfect lie, she makes a deal with Eyden, a mysterious fae trader. As Lora struggles to keep the promises she has made to both her family and Eyden, she is forced to dig deeper into the twisted world of Liraen — her web of lies unravelling.

AMIRA has spent years trapped by her brother in her childhood palace. Her engagement to the soon-to-be High King of Liraen is her only hope for the freedom she has been longing for. As the future Queen, she seeks to finally leave her painful past behind. But she soon discovers that the palace holds dark secrets — bringing up memories Amira had long since tried to erase.

As power games are woven, promises are broken, and desperate lies are revealed, Lora and Amira both find themselves at crossroads. Will they risk it all and face ruin?

Tell us a little about the book. How did you come up with the idea for Through Fire & Ruin?

The idea started during the first lockdown back in 2020. With the whole Covid situation, I had this image in my mind of a girl trying to find a cure in the fae land and then things evolved from there. The plot and characters changed a lot during our brainstorming sessions but Lora and her goal has always remained the same. It’s funny to think back on the very first rough idea we had. Amira, our second MC, was a completely different person and Eyden and Elyssa didn’t even exist.

There are so many incredible characters that I absolutely loved reading about. Which of the characters pulled at your heartstrings the most while writing?

Lora. She was the first character we came up with and I’ve grown really attached to her. I’ve put parts of myself in her and I want to see her happy. But if that was always the case, it would be a pretty boring book.

What is your favourite scene from the book? Something that you are most proud of writing?

There are so many. One of my favourite scenes is this action scene involving Lora where a lot of things come together. I don’t want to spoil anything so I’m being very vague on purpose, but if you’ve read the scene, you know. I’m also proud of the romance in TFAR because I’m an absolute sucker for romantic subplots. There are some cute scenes and there’s also some heated arguing going on that I always get giddy about when someone tells me they loved it.

If you were to visit Liraen, what would you do? Where would you go?

Well, definitely not the palace—that sounds like a ticket to hell. I would go to Caligo, a club that’s mentioned more than once in TFAR. Maybe I’d run into Rhay. I feel like that would be the safest option and it could be fun. Although I would love to meet Elyssa, so maybe I’d stop by her place too.

Did you need to do research while writing Through Fire & Ruin? Whats the most interesting thing you learnt while writing the book?

The most research I did was really about writing a novel in general. There was lots I had to learn—from basic things like formatting to when to start a new scene… Story wise, there is a virus going around in the human world of TFAR and I wanted one of the symptoms to be prominent, purple veins. So for some time, I was doing research on what could cause that and what could kill a person. Very light hearted reading.

What are your writing habits? Do you write every day, keep a schedule or have more erratic habits?

I don’t write every day. I will do longer, intense writing sessions mostly in the evening or late at night and then I often don’t write for days. I always have a writing deadline set which I need to push myself. Lately, I do have a more precise schedule because my co-author and I have been working hard on finishing draft one of book

Do you have any advice for aspiring writers?

My main advice is: Do it. Get started. I spent too much time telling myself I couldn’t. Don’t let the doubts get to you. I know it’s hard to find the time. It definitely is when writing is not your only job and the truth is, it won’t get any easier. But once you start and you love it, you will somehow make time for it. You can do it—just start and see where it takes you.

What are you currently working on? WHEN IS THE SEQUEL COMING!??

I’m working on the sequel right now and it’s been so much fun to write. There is no release date yet but it will be sometime next year for sure.

The kind who complains a lot. I’m not cut out for farming or sewing or cooking. I would be the peasant who dreamt of doing something bigger and would constantly annoy people.