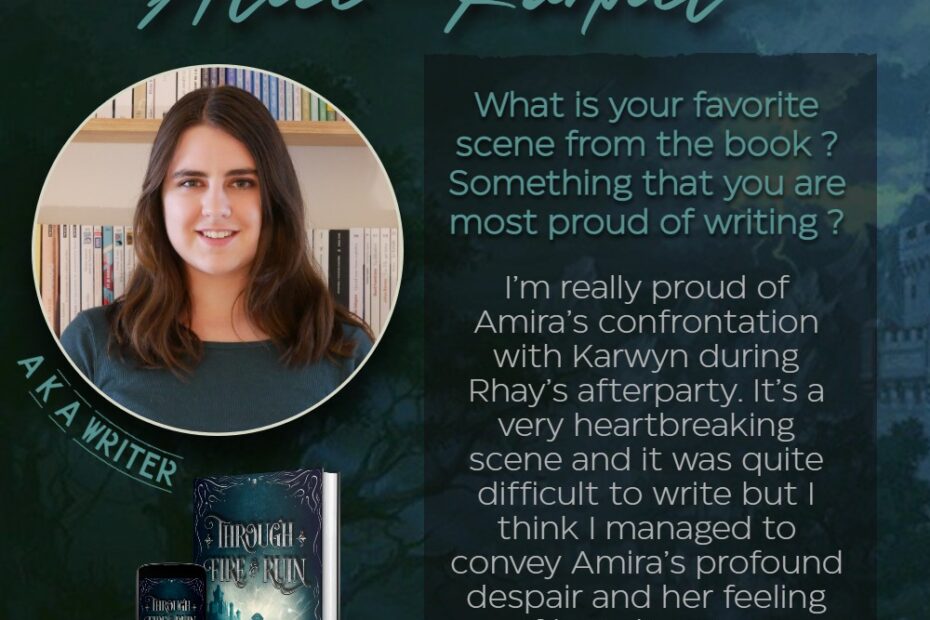 Tell us your story ? What made you start writing ?

I read a lot as a child. I would go to the library and borrow as many books as possible and read them all during the week. Writing came naturally from my avid reading. I started inventing small stories and then I moved to more ambitious ideas. They were definitely too ambitious! I would start writing a novel with no planning, already seeing myself with a 500 pages book. Usually my enthusiasm for the story would fizzle out and I would move on to my next idea after only writing a dozen pages. Then as a teen I decided I really wanted to actually finish a story. So I started writing short stories. I wrote three before moving on to a novel. This time I outlined the book and found a contest to apply to. This deadline helped me actually finish the first draft of the novel. But the editing process seemed too daunting so I kept the novel as a Word document. Same for my second novel that I wrote during NaNo Wrimo. I managed to do the 50k words and was super proud of myself but I dreaded the editing process so much and I felt like finding a publisher would be an impossible task.

And then, Corona hit and I found myself talking with one of my best friends, Jenni about writing our very own book. I would have never been able to go through with it if I wasn’t writing Through Fire & Ruin with her. I had some moments of self-doubt but she was always there to remind me of our goal.

What three items would you take with you on a deserted island ?

My phone, a portable battery and a book.

Definitely cheese. One of my comfort food is a nice grilled cheese. I used to eat them a lot when I was studying in the UK. I had a little panini press in my studio flat and I really should buy another one now that I’m back in France!

Would you rather cook or order in ?

Depends on the day. If I get a specific craving (like sushi or Mexican food) I would probably order in. But I enjoy cooking a lot too, especially if I’m having friends or family over.

About Through Fire and Ruin

Tell us a little about the book. How did you come up with the idea for Through Fire and Ruin ?

The starting point of the story was definitely heavily inspired by the Covid situation. We started brainstorming with Jenni during the first lockdown. When she came up with Lora’s character and her quest for a cure, I was immediately hooked, it felt incredibly relatable and a bit like wish fulfillment. Amira’s character was there from the beginning as a counterpart to Lora’s journey but her personality changed a lot from our initial brainstorming. Rhay also ended up getting a bigger role (which I’m really happy about!).

There are so many incredible characters that I absolutely loved reading about. Which of the characters pulled at your heartstrings the most while writing ?

Amira is definitely the one that pulled at my heartstring the most. I have been the one writing her POV and a lot of her scenes were very emotional to write. I feel very bad for all I’ve been putting her through but she’s a surprisingly resilient character.

What is your favorite scene from the book ? Something that you are most proud of writing ?

I’m really proud of Amira’s confrontation with Karwyn during Rhay’s afterparty. It’s a very heartbreaking scene and it was quite difficult to write but I think I managed to convey Amira’s profound despair and her feeling of hopelessness.

If you were to visit Liraen, what would you do ? Where would you go ?

I’d probably go to Caligo to have a fun night out with Ray. And then I’d visit Amira’s kingdom, Allamyst. Since it’s under the patronage of the god of beauty, I think the sightseeing would definitely be worth it. I’d make sure to avoid Amira’s brother though.

Did you need to do research while writing Through Fire & Ruin ? What is the most interesting thing you learnt while writing the book?

Since English is not my first language, a lot of my research has been on specific vocabulary relating to castle architecture or royalty. We’ve also been doing a lot of research on self-publishing since it was brand new for Jenni and I. I feel very lucky that so many resources are available now and that self-publishing is getting more and more accessible.

What are your writing habits? Do you write every day, keep a schedule or have a more erratic habits?

Since I’m co-writing the novel with Jenni, we had to keep a tight schedule so that none of us gets stuck waiting for the other to finish her chapter. I used to write during the day but I have recently started a new job so I’m now writing in the evening or during the weekend.

Do you have any advice for aspiring writers ?

Writing can be a very lonely journey so my advice would be to seek out other writers that you can go to for advice and questions (and to celebrate each other’s work!). I’ve found a great writers group led by the amazing Melissa Hawkes. Everyone is so supportive and super helpful.

What are you currently working on? WHEN IS THE SEQUEL COMING??

Jenni and I are indeed working on the sequel and I’m so happy to go back to Liraen. We’re very close to finishing the first draft but we haven’t settled on a date for the release yet.

Everyone always think they’d be royalty or a knight if they were born in Medieval times, but let’s be honest, you probably wouldn’t be. So what kind of peasant do you think you’d be if you were born in medieval time ?

Since I enjoy cooking and baking quite a lot, I think I would have been a cook for a rich family or maybe I would have worked in a bakery. Hopefully I would have gotten to invent a few new recipes!