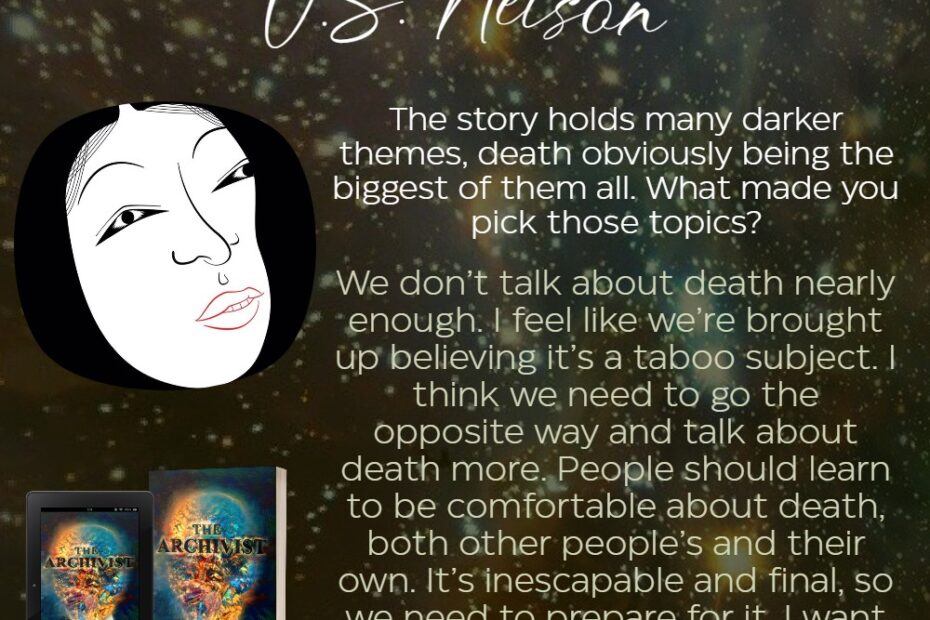 I’m not sure. I just got it into my head when I was 18 that I wanted to write stories and I’ve been doing it ever since. The very first stories I wrote were terrible and it took me a long time to write anything that could be considered good, let alone great. Now, almost 20 years later, I’m finally writing the stories I wanted to write when I was 18. It’s been a long road to get to this point and I’ll be the first to admit I have no natural talent as a writer. Any skills I now have are the product of hard work and a great deal of tenacity.

Daydreaming. I’m not sure if that’s what you’re after, but I’m a chronic daydreamer. I have daydreams that are part of a saga that has lasted years, with the people in the daydreams ageing as the daydream progresses. It’s not that my life is bad, it’s actually pretty great, but I do need my daydreams to survive.

I’d love to see how the universe was created, so about 13.7 billion years ago. Though I’m not sure exactly how I would exist in a universe during its early state. I suspect I’d need to be a ghost of some kind that could observe but not interfere. Though if I observe I’ll be taking the energy from photons and I suspect there will be quantum complications involved too. I image this will be difficult.

Bucks fizz and the croissants you roll and bake yourself on Christmas morning. I fire the cork from the bucks fizz into the garden and try to land it on the shed, my kids love that.

A living wage. That’s a really tough question as there’s so much I’d want to do, but a living wage seems like a great way to increase fairness. I’d also want a wealth cap too. No one needs to be a billionaire.

May become sassy without provocation.

This book broke my heart! Squeezed it so damn hard it shattered to pieces and got pulled into the Aether, where nothing but hunger and death resides. Oh. My. God – I mean Archivist – as clearly God does not exist in the V.S. Nelson’s created world, but an Archivist does. With a godlike ability he can possess souls, granting them life after death while possessing their essence. He almost pulled me in, too, with his calm confidence and ethereal vibe.

Death is not the end.

There is no God waiting for you in paradise. No afterlife where friendships severed by death are reformed and families reunited. There is only the Aether, a dimension of insatiable hunger that will possess you no matter the life you led.

Yet there is hope for a lucky few. Archivists, existing between the world of the living and the world of the dead, can offer salvation… for a price. Taking your essence in the final moments before death, they become your afterlife, allowing you to speak with those who remain.

When the last archivist is tricked into murder by troubled teenager, Sun-young Kang, he finds himself the centre of a suicidal cult that die at his feet. But there is more to these deaths than the Archivist realises. Someone is coming for him.

The Archivist may be the closest thing to a god that walks the Earth, but is that enough to keep those he cares about safe?

The Archivist is an incredibly rich novel with a truly original concept. It is cinematic in its scope and details the haunting, but also beautiful, gift an archivist could offer a person in their final moments.

Tell us a little about the book. How did you come up with the idea for the Archivist?

The original idea came to me in 2010. My granddad was in hospital dying and the family was gathered around his bed – much like the end of Chapter One. He was trying to speak to us, but the words weren’t coming out. The nurse who was looking after him leant over, her ear nearly touching his lips, but even she couldn’t understand what he wanted to say. I found the whole thing terribly unfair. I felt like my granddad had something he wanted to say, but just couldn’t get the words out. What he needed was someone to get the words that were in his brain and speak them for him. That is where the idea for archivists came from, people who can take possession of someone’s essence and project the face of the dead over their own and give everyone a fitting goodbye. The idea grew from that, and so did what an archivist is, but ultimately the concept comes from the unfairness of death and the propensity for people to hold back what the really want to say until it is too late and the moment passes forever.

The story holds many darker themes, death obviously being the biggest of them all. What made you pick those topics?

We don’t talk about death nearly enough. I feel like we’re brought up believing it’s a taboo subject. I think we need to go the opposite way and talk about death more. People should learn to be comfortable about death, both other people’s and their own. It’s inescapable and final, so we need to prepare for it. I want my book to get people thinking about death.

What challenges did you face when writing the book?

Writing this book was a slog. Other stories I’ve written have been quick and uncomplicated, but there was so much I needed to consider for this story that it took a long time to get it right. I’m also deeply proud of the concept I created and wanted to do right by it. I could have been in danger of creating a fascinating idea but then executing it really poorly, which is why I spent so long refining The Archivist. It was originally a short story in 2012, an 80,000 work manuscript in 2015 then I completely re-wrote it in 2019 into the 102,000 word story that I published. Many, many hours of my life have gone into this book.

Is there any particular charter you connected with the most? Why?

I feel like I should say the Archivist, but I think I connect with Sun-young more. She does what she feels is the right thing to do regardless of who she pisses off. I love her conviction and she certainly doesn’t do things by halves. Am I as cool as Sun-young? No. But I want to be.

I’m very methodical when it comes to planning. I’ll have an idea, then I’ll spend two or three months just adding to that. That’s my favourite part of writing, where I just let the ideas bleed onto the page. After that I create a timeline which is further broken down into bullet point events that occur in each chapter. I then write a chapter plan with a page or two for each chapter. That’s usually a 30,000 word plan and from that I write the story.

I try to write four or five times a week between 20:00 and 21:00 during which I write 500 to 1000 words. I have a busy life with work, family and other commitments, so the time I spend writing needs to be focused otherwise I won’t produce anything.

What is one of the most interesting things you have researched while writing a book?

One of the characters stops their heart with the intention of having it restarted by someone else using epinephrine. Researching that was interesting as it meant reading medical papers on people’s hearts being restarted. I’m a scientist by career, so I’m used to scientific research. Plus, I’m lucky that my other half is a heart failure specialist! I also have a father-in-law who’s a retired GP, so he was able to answer other medical questions I had.

My favourite part is hearing that people I don’t know have read my book and have loved it. That really means something to me. This is especially true for The Archivist, which, so far, has been really well received. I feel very lucky, but I also know this wasn’t all down to luck. I worked hard on this story.

My least favourite part is knowing that not many people will read this story; maybe 1000 people, at most. Because I self-publish, which was a conscious choice for this story as I didn’t approach any agents or traditional publishers, the degree to which I can market The Archivist is limited. Without a big publishing house behind me or tens of thousands in marketing budget, very few people will know this book exists. That’s frustrating because there are probably thousands, if not millions, of people who would enjoy this book if they read it. But I shouldn’t complain as there are so many authors in the same position as me. I write to share my stories, it’s just a shame I can’t share them very far.

A middle grade science fiction novel about a girl who lives at the base of a space elevator and sells marbles that can stop time. I’ve completed the second draft and will work on the third later this year. It’s a story for my daughter, Violet.

I’d want to make sure the drunk woman is safe before worrying about where I need to be. Once I’d done that, I’d ask the man in sunglasses. Though I’d probably question why he’s wearing sunglasses late at night when it’s presumably dark. Is he blind? If so, I’m not sure how useful his directions would be. I’d probably just walk around the city in a methodical fashion until I found where I needed to be, that’s always worked in the past.