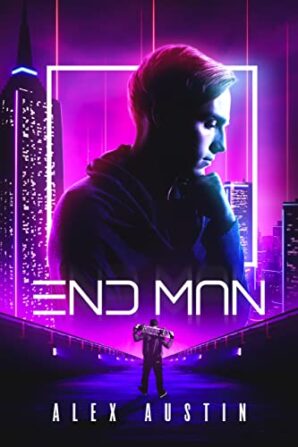 Once your life is diluted to ones and zeroes on the End Man’s desk, it’s over. Or is it?

Afflicted with dromophobia, the fear of crossing streets, 26-year-old Raphael Lennon must live out his life within the four thoroughfares that border his Los Angeles neighborhood. Luckily, he found a fulfilling job within his space as an End Man at Norval Portals where Raphael is the best possum hunter in the company. He hunts the dead who live, people hiding under the guise of death. He doesn’t want to bring these “possums” to justice but to keep them out of his firm’s necrology database so their presence doesn’t crash the whole system.

When the company founder assigns Raphael a fresh case, he sets aside all other work to investigate Jason Klaes, a maverick physicist with boundary-pushing theories that may have attracted unwanted and sinister attention. Raphael soon discovers messages sent by Klaes after his supposed death—threats to people who have subsequently died. As he digs deeper, he receives his own message from Klaes, a baffling command to pursue the truth.

As he unravels the mystery, he unearths the secrets of his own phobia-plagued life and the inner workings of Norval, whose corporate ambitions include a nightmarish spin-off of its product. Raphael must stop them or he’ll never be free and neither will anyone else.

First of all, I want to thank Alex Austin for providing me with an ARC of his book, because WOW…

His book is hiding a deeper and slightly terrifying concept and he’s managed to bring it to life with an amazing story and compelling characters. The whole idea behind a company harvesting our online presence and saving all of our information is not bizarre and there’s most certainly some of that going on in the real world, but the extent to which Norval Portals operates is completely horrifying.

Even though I wasn’t particularly at the edge of my seat the whole time, nor lost sleep over it I enjoyed this book through and through. You don’t always have to be an emotional wreck after reading something to know what you read was great!

The characters were one of a kind and the whole plot line impeccably well thought out. Alex Austin has certainly got his own style and voice and the way it brought together this story was amazing to see.