Chuck Tucker investigations The Club Shooting The beat was sick and the crowd wild. I might’ve had one too many shots, but it didn’t matter when the stunning blonde ran her hands down my chest. We were crammed up against the bar with a bunch of other partygoers, most of them pissed off drunk or on their way to it. I’d ordered her a cocktail, but she was already slurring her words before I squeezed in next to her. A couple of compliments and suggestive comments later and she was leaning into me. Not my usual type, but she was hot as fuck and I didnt bother to care about the rest when she bit down on my earlobe. Fuck. I pulled her closer to me, letting her know exactly what I thought of her sneaky tongue and soft lips sucking on my neck. Her breasts pressed up against my chest were probably fake, but that ass I was gripping was perfectly firm, perfection. It was my day off, nothing to stop me from having some much needed release. The local club, Wicked Angels, was as good a place as any to find what I needed and the woman writhing against me was ready to give it.  There were too many people around. Drunk or not, this wasn’t the place to continue our introductions. She seemed to be on the same page, because as her hands roamed around my chest, her lips uttered exactly what I was thinking. “Let’s get… Read More »Chuck Tucker investigations 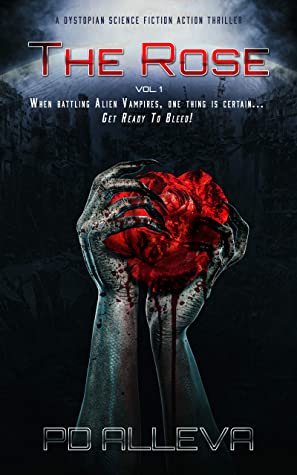 The Rose by PD Alleva

A dystopian science fiction thriller of telepathic evil greys, mysterious rebellion, martial arts, and Alien Vampires. Sandy Cox believed WWIII was over. But for those Alien Vampires, War Has Just Begun. Forty-eight hours after a World War III treaty is signed, Sandy Cox awakens in an underground compound unable to move. Tied to machines she screams for help but no one answers. At least no one human. And they’ve taken her unborn child. Phil is a rebel freedom fighter who has had more than his share of Alien Vampires. Armed with THE BLADES, a sacred alien martial art, he enters the compound on a mission to find Sandy. But as he battles through the compound, Phil discovers Sandy has her own agenda. Finding her stolen child is all that matters. But the vampires have their own plan and Sandy’s baby is at the heart of their diabolical plot. Joined by a crew of rogue soldiers, they must navigate the underground compound, battling genetically mutated humans, aliens and monsters. When battling Alien Vampires, one thing is certain… Get Ready To Bleed! My Review: This book! This book is just absolutely brilliant! Incredibly written, a story that is gripping and quite literally left me stunned at several places throughout. We’ve got a world war 3, land devastated by war, people in refugee camps taken to underground laboratoriums, mass murders and to top it all of ALIEN VAMPIRES! The way this whole scenario comes together is so incredibly brilliant you’ll have to read… Read More »The Rose by PD Alleva 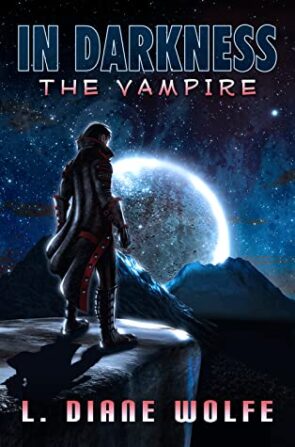 Souls shrouded in darkness… Stuck working as a barmaid for her demanding father, Anna dreams of adventure. When mysterious strangers enter the bar, she overhears they seek Zancrela, an ancient fortress filled with treasure and a magical library. Taking her chance, she offers to guide them. The conditions: deliver Zancrela or die. As they journey through the wilderness, she discovers their secret: they are vampires. And most view her as food. One takes interest in her and her heart dares to hope, but it might not be enough to change her fate. Will Anna find Zancrela or become a vampire morsel? I must say I had no idea I would love this book as much as I did. I also didn’t expect to devour it in two days, but I did! Everything from the plot to the characters to the world it takes place works to reel in the reader. I was enthralled. Anna comes across as a sweet, innocent girl, working hard to follow her dreams. Her craving for knowledge and a life out from under her father’s reign drives her motivations. She is also the key to finding Zancrela, a location Victor and his clan have been searching for for months now. Not knowing what she’ll get herself into, she offers to guide the group if they’ll allow her access to Zancrela’s library upon their arrival. During their journey, she shows more strength and bravery than any of her companions would expect of a mere human. She may… Read More »In Darkness: Vampire by L. Diane Wolfe 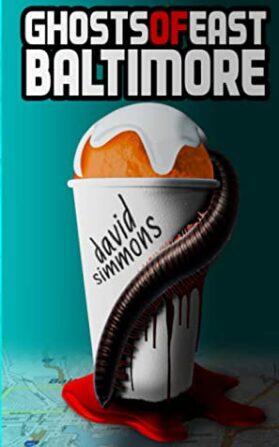 Save the Eastside, save the world. In Baltimore, Worm has just returned from a two year stretch in prison. When he finds out that his hometown is being brutally destroyed by a dangerous new chemical, Worm is reluctantly catapulted into a phantasmagoric journey filled with chaos and destruction. Can one man save the city before his 9:00 p.m. curfew at the halfway house? The book started out great.Worm’s character is well written and the whole scene of him getting out and thinking about a new beginning, no matter how hard it would be to achieve was all great. Then he starts talking to Simone and I get lost a bit. All those big fancy, or maybe not fancy but definitely very specific, words he uses in the conversation made me wish I had a dictionary. But then again, needing a dictionary to decipher what is supposed to be a normal conversation seems like an overkill.For quite a long time Worm just wonders the streets of Baltimore and you’ll get the whole history of the city. I believe I might be a bit too young to have enjoyed the recount.I’m sure Worm’s childhood flashbacks were important in shedding the light into his past. The way it connected to his current situation was rather well done. But the whole flashback itself included a whole lot of words I did not understand, again.I expected Worm to get in trouble a lot sooner than he did, and meanwhile I was already stumbling through conversations… Read More »Ghosts of East Baltimore by David Simmons 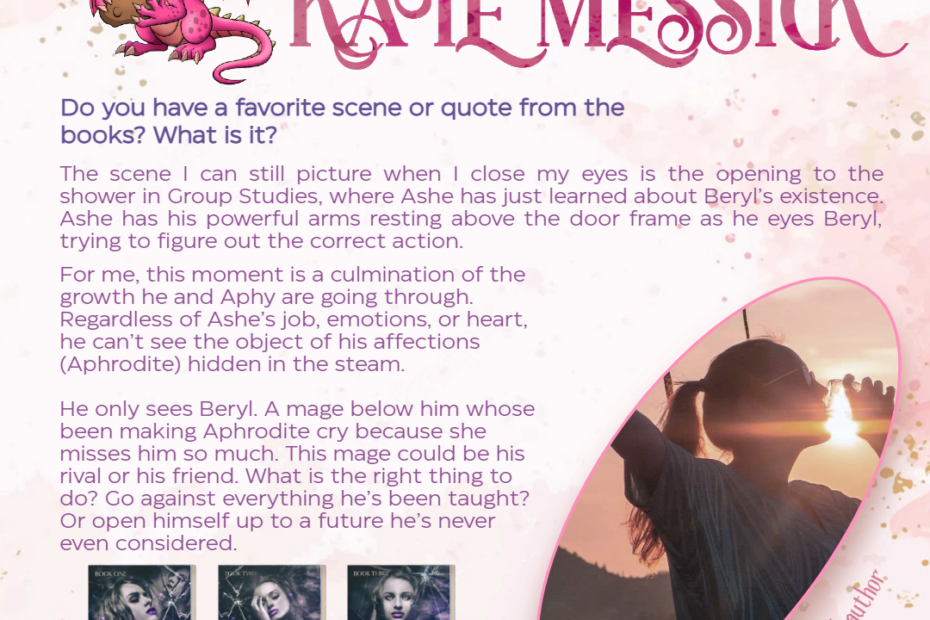 About the author Tell us your story? What made you start writing? Long story short – I wasn’t getting enough sex in my marriage, so I wrote my husband a guide in the form of a romance novel. It didn’t improve my sex life, but I found I really enjoyed writing. If you’re looking for a bit more: I’ve always been an avid reader. I wrote a terrible novel in high school (USA); my Dad and teachers were brutally honest about it. I was in the special education program because of dyslexia and a hearing impairment, so writing wasn’t easy for me. I put the concept out of my mind and focused on more attainable goals. Fast forward twenty years, I’m now a displaced classical clarinetist living in England – away from my family, my friends, and the orchestra (Symphonic Anime Orchestra) that I founded and wrote a ridiculous amount of music for every year. I’d gone from a career-oriented woman with big goals to basically a decorator wife. It was fun for a bit, but wow, not having my creative outlet got really old, really fast. Which also messed with my marriage. In a fit of rage, I just barfed all my issues into a story and gave it to a friend, who was really encouraging. That led to another book, not about my issues, which led to my first trilogy. Writing words lights up the same happy creativity that music notes did in my brain. I’m still married,… Read More »Kate Messick 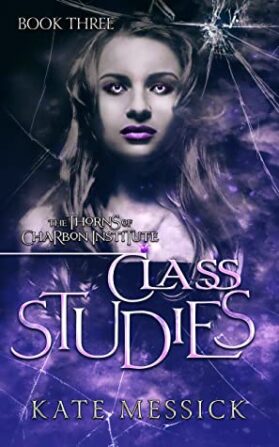 Class Studies: The Thorns of Charbon Institute by Kate Messick

A terrifying mix of drugs, fear and pure need forced my hand. I didn’t necessarily want to mind control the Magical Authorities auditing the Charbon Institute’s broken system. But they kept me from my mages and hurt the people they should’ve protected. Now I have to live with the consequences of my actions. Operation DUMP has to free me from my magic’s lust-filled need so I can remove my dark stain from the people trapped in my spell before I drag the men I love down with me. With a new recruiter stirring up trouble in the student body, I must find myself and the confidence to claim my path before the Institute is ripped apart. Class Studies is a fast burn, reverse harem, dark bully romance with M/M/F and M/F themes. The trilogy is a college-age academy setting, 18+. All three books are written and complete the story. Please be aware there may be triggers, see inside of book for the list.  Class Studies is the third and last book in the Thorns of Charbon Institute trilogy. If you haven’t read the previous books, you probably should start from the beginning. There’s a lot going on that gets explained earlier on. If you have read the two previous books and are pondering if the third one’s worth it: Hell yeah! If you haven’t read the series yet, go get them books! You should know this story is dark, deep and spicy in all the right places. There’s magic, love,… Read More »Class Studies: The Thorns of Charbon Institute by Kate Messick